5 Marketing Lessons You Can Learn From Trump

It’s been just about week since the big election.  Now that the dust has settled, I’ve had a chance to think about some things.  It’s not the typical stuff like who’s email is where and who is grabbing who where!  There’s been a lot articles about President-Elect Trump.  Not many of them are marketing focused, but this one is!

This is NOT a political post.  I’m not interested in debating political opinions for or against him.  So please don’t comment on that.    Instead let’s learn something from his campaign and figure out how we can apply it to our own businesses.  In reading a few articles on the Trump machine and looking back on the campaign, here are 5 marketing lessons I was reminded of after looking back on Trump’s campaign. 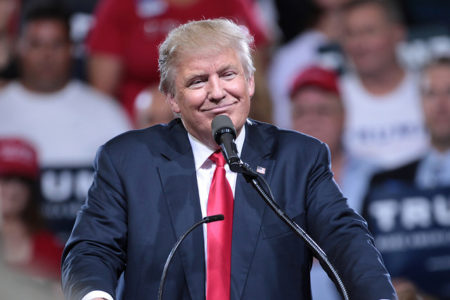 The Takeaway – Take the time to develop your key messaging and make your message a part of all you do.

3.  Free coverage is better than paid
Hillary Clinton spent a boat load of cash on ads against Trump.  He spent spent far less and still won.  Why?  Trump was ALWAYS on the news.  The media covered everything he did and said for months.  He always gave them a reason to cover him.  When other candidates couldn’t even get on the debate stage, Trump was doing interviews with major news outlets spreading his message for free.

The Takeaway – I’m not saying you should go out and start saying crazy things so the media picks you up.  I’m saying that if there is a professional way for you to get media coverage or for you to get your message out in an authentic way without paying for advertising, do it.  Authentic exposure will always trump paid coverage (no pun intended LOL).

4.  Keep it simple
As I said earlier, he created his key messaging and stuck to it.  Even though the specifics of what he stands for fluctuated throughout the campaign he remained consistent on the topics he discussed; immigration, health care, homeland security, the economy and foreign trade.  When talking about these topics he kept it simple.  He didn’t get in to too many details.  Some may argue that’s because he doesn’t have details and his policies have no substance.  Maybe that is the case, I don’t really know but at the end of the day I think his ability to keep it simple, when other politicians want to yammer on, resonated with a lot of Americans.

The Takeaway – Don’t try to do too much and make your marketing too complicated.  Keep it simple and consistent.

5.  Authenticity wins
Even if you think he’s the biggest piece of crap, the truth is, he shows people his “real” side even when it’s not politically correct or socially acceptable.  When it comes to business, I believe in showing clients your “human” side.  I also think it’s important to figure out what you are and stick to it.  What are you good at?  Who do you want to work with?  What do you love to do?

The Takeaway – Asking yourself those types of questions will help you determine what your business stands for and when you are authentic it will always be easier for you to connect with your tribe.

My final takeaway; you don’t always have to have the most experience to get the job. Trump has zero political experience and just became President of the United States.  How did this happen? Why?  Simple, he connected with his tribe.  So if you’re just starting out, don’t have a lot of experience or are new to being in business for yourself, don’t be intimidated by others with more experience.  Connect with your tribe.  Show them your skills and work hard to build the relationship.  If you deliver, your experience soon won’t matter.

So, whether you’re crying over Hillary’s big loss or celebrating Trump’s unprecedented victory, the items I’ve mentioned here are important marketing lessons to keep in mind that will help your business grow!